In Enns (Upper Austria), the international healthcare provider VAMED is launching a new program for smoking cessation as a part of a stationary pneumological rehabilitation in cooperation with gespag. The new “Smoke-Free Rehab” offers a special therapy program as part of the three-week inpatient rehabilitation. It is aimed specifically at smokers who already suffer from COPD or another lung disease.

The “Smoke-Free Rehab Enns” in detail

In the “Smoke-Free Rehab Enns”, patients receive a special smoking cessation program tailored to their needs. During the 21-day hospitalization, the patients are carefully prepared by psychologists and physicians for the smoking cessation, which takes place at the latest during the third week of the hospitalization – regardless of how high the tobacco consumption was at the beginning. Regular group therapies, individual counseling, and physical training facilitate withdrawal and improve resilience. Respiratory physiotherapy, strength and endurance training, inhalations and massages accompany smoking cessation.

Ongoing CO measurements from the respiratory air visualize the sinking pollutant content in the body and additionally motivate the patients. As part of the smoking cessation program at the Rehabilitation Clinic Enns, acupuncture is also being used as a supporting measure to strengthen the future success. Contacts with a well-established ex-smokers’ self-help group and special dietary consultations facilitate the smoke-free life following the rehabilitation stay.

Long-term studies have shown that virtually all participants in inpatient smoking therapy shake off their smoking habits in the last two weeks of inpatient care as scheduled, and less than a quarter resume the previous tobacco consumption later. 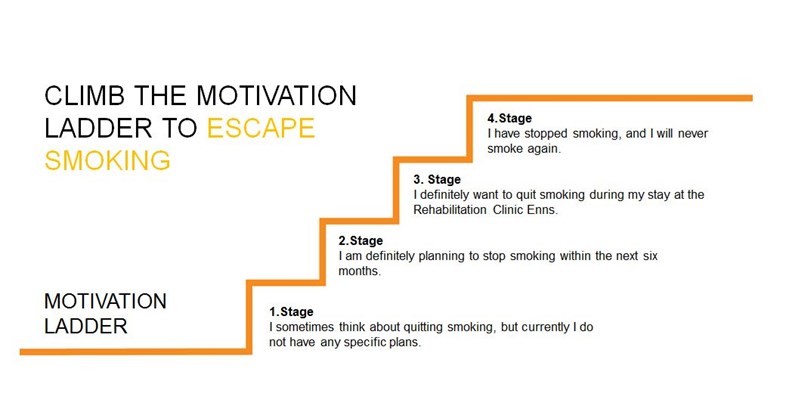 Currently, 26 percent of the Austrian population describe themselves as active smokers, 27 percent of young people smoke. Thus, Austria has been among Europe’s “leading group” for many years. Each year, Austrian statistics record 9,000 premature deaths caused by smoking. Smokers live on average of 10 to 15 years less than non-smokers do.

Smoking is the main risk factor for heart infarction, stroke, lung cancer, and chronic obstructive pulmonary disease (COPD). About one-quarter of all cancer-related deaths are attributable to the consequences of tobacco consumption. There are more than 90 carcinogenic substances in tobacco smoke, but only few people are aware of the direct link between tobacco and cancer yet. Even though “new forms” of smoking – e-cigarettes, shisha, and hookah – convey the impression of being a “healthier alternative to normal tobacco consumption”, yet they are nevertheless dangerous. “Only complete cessation of smoking can end this dangerous development”, says Purkarthofer.

The Rehabilitation Clinic Enns is a health facility of VAMED in cooperation with gespag.