The author Dr. Matthias König is the medical director of the Neurologisches Therapiezentrum Kapfenberg – a healthcare facility of VAMED

Multiple sclerosis is the most common disease that can lead to a disability in young adulthood. Accordingly, this disease is of significant social-medical importance. The research in recent years has significantly expanded knowledge about the development of this disease. Studies have identified several factors that promote the occurrence or deterioration of existing multiple sclerosis (Fig. 1).

According to today's knowledge, the development of MS requires the concurrence of a series of factors that ultimately result in the disease in the sense of a causal cascade, i.e. the succession of several reactions (Fig. 2). As a basis, a certain genetic disposition is required, whereby one hundred genes have been identified that have a certain significance for the development of MS. On these grounds, MS can develop if other environmental factors are present.

The most important, but unfortunately unchangeable, environmental factor is infection with the Epstein-Barr virus (EBV). Serological studies have shown that practically all patients had been infected with EBV. Modifiable environmental factors include Vitamin D deficiency, smoking, lack of exercise, being overweight and certain nutritional habits. 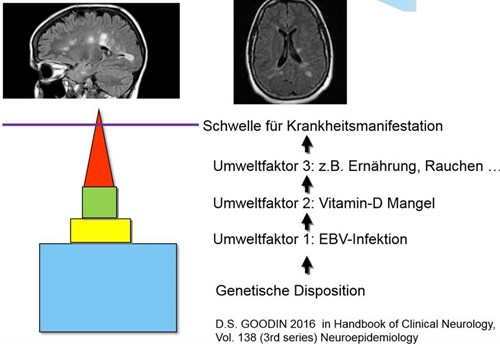 As MS usually manifests itself in the second to third decades of life, the environmental factors mentioned must take effect relatively early in the life of an individual. Those environmental factors that promote the development of MS have, therefore, usually already occurred in childhood or early adulthood. If the environmental factors mentioned occur in this "vulnerable" window of time, a disease is more likely. Particularly in children of MS sufferers, who are already highly likely to have genetically increased risk, everything should be done to evade avoidable risk factors (poor diet, smoking, Vitamin D deficiency).

The genetic risk for the development of MS is increased up to 3-fold in the case of certain changes in the surface of cells in the immune system. If the person concerned is also a smoker, the risk increases 14-fold. The chronic inflammation of the bronchial mucosa triggered by smoking results in the formation of auto-aggressive T-lymphocytes, in certain genetically determined constellations, which leads to MS disease (Fig. 3). This interaction has also been proven for other autoimmune diseases (e.g. rheumatoid arthritis).

Studies have shown that women have an increasingly higher probability of developing MS compared to men. This increase also correlates with the increasing incidence of female smokers. Overall, the evidence that smoking increases the likelihood of developing MS is very clear. This is underlined by a clear dose dependency in terms of the quantity and duration of Smoking.

Likewise, the negative influence on the clinical development of the disease has been proven, as the initial relapsing course transitions more rapidly into a chronically progressive course in the case of smokers - thus the disease progresses more rapidly. Smoking cessation programs are therefore one of the most important measures in slowing the course of MS. Incidentally, passive smoking also increases the risk.

The correlation between a Vitamin D deficiency and the development of MS has now been proven beyond doubt. Vitamin D is formed in the skin in the human organism. Adequate sun exposure with sufficient UVB proportions is necessary for this. This is an excellent way to explain the geographical distribution of MS frequencies (Fig. 4. and 5.).

In addition to the body's own production via the skin, a Vitamin D deficiency can also be prevented through the right diet. This is also the reason why certain ethnic groups have a low MS frequency despite their geographically unfavorable location with few hours of sunshine. Examples include the Inuit, who meet their Vitamin D requirements by eating oily fish and the Lapin Lapland, who have Vitamin-D-rich reindeer meat as their main food source. 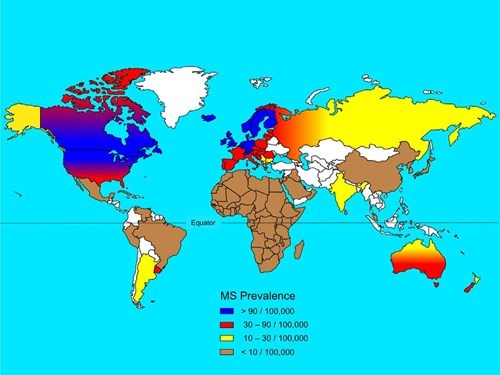 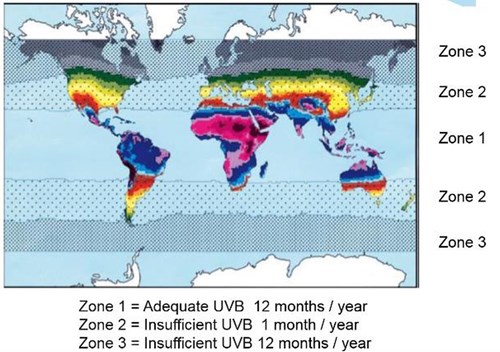 Being overweight and lack of exercise with multiple sclerosis

There is now a good amount of evidence to show that obesity in childhood and young adulthood is a risk factor for the development of MS.

There is evidence that this effect is significantly more pronounced in females. Scientists suspect that this is due to the inflammatory conditions that exist in the case of obesity. In addition, the often latent Vitamin D deficiency plays a role.

A recently published study analyzed the correlation between physical activity and multiple sclerosis risk. It found that an average of more than three hours a day of physical activity in youth reduces the risk of MS.

Experimental investigations have shown that nutrition has an influence on MS disease. For example, it is proven that a calorie-rich diet with a high proportion of saturated, long-chain fatty acids can cause and promote inflammatory processes in the body.

Based on the findings about the correlations between certain nutritional factors and their influence on inflammatory diseases, the following nutritional recommendations were formulated for MS:

"Mediterranean" diet, reduction of animal fats, 2 x 500 mg propionate if possible, prebiotics and probiotics to achieve an optimal intestinal balance.  The Neurologisches Therapiezentrum Kapfenberg is a VAMED health facility.
The NTK provides residential early rehabilitation of neurological patients immediately after acute treatment of a neurological disease. The focus is the treatment of severely affected neurological patients after strokes, cerebral hemorrhages, multiple sclerosis and after traumatic damage to the central and peripheral nervous system.